Recently it has come to my attention that Village Roadshow is going to start issuing fines to people in Australia, caught downloading via torrent. I’m going to put a little guide together that tells you how to avoid being fined $200+. This is stuff you should have already done, but since I know a lot of people are ignorant of how torrenting actually works, this may shed some light. Furthermore, I’ll throw in some links about how to change your DNS (the thing that pulls up websites, to put it in very basic terms) in your router, though this isn’t entirely required, it is helpful (but can be difficult for people who aren’t entirely sure of what they’re doing).

First of all, if you’re running the latest version of µTorrent, get rid of it. Now. The latest version of µTorrent you want is version 2.2.1, and anything after this version is an ad-filled mess that reports data about your usage back to Bittorrent Inc’s servers. Not only that, but because of the risk of it being full of spyware, a lot of websites, trackers and even other clients ban µTorrent which means torrents with lots of seeds and leechers often won’t connect to most of them.  You can find 2.2.1 here at oldversion.com (for Windows only) but I would use some of the other alternatives, since that version is so old.

Once you’ve installed a torrent client that doesn’t suck, you need to make sure you setup your upload speed and torrent encryption, because the default settings will strangle the shit out of your connection, and the lack of encryption means your ISP can see exactly what you’re downloading. Depending on what you use your internet for, your overall speed, and if you have any data caps, your upload limit should be 5-50% of your total upload. Here’s an example: 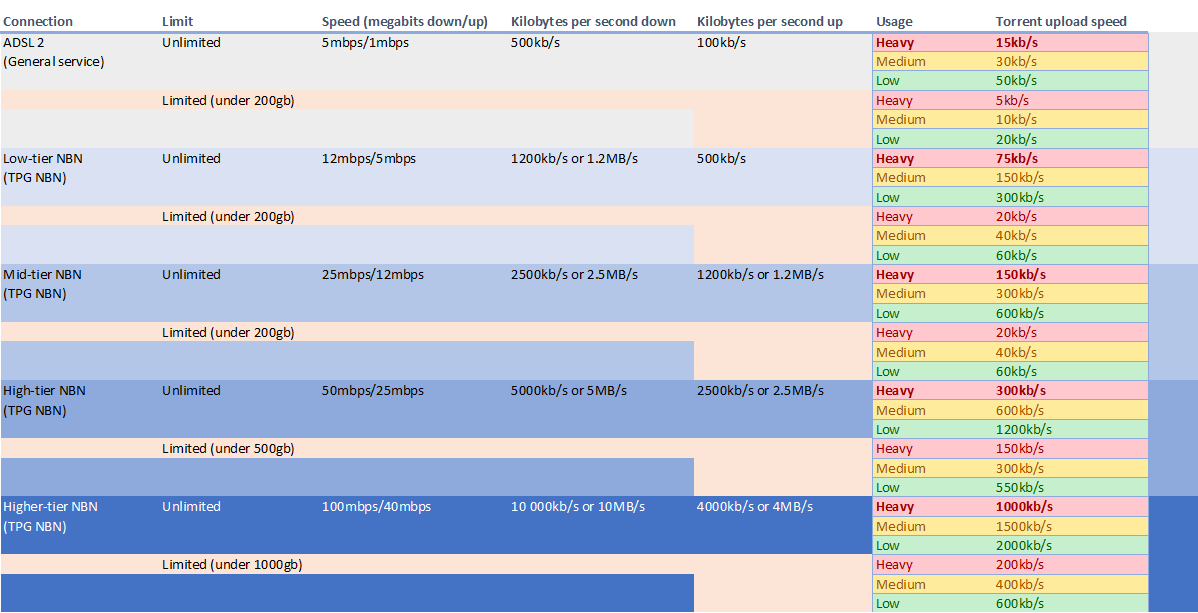 Approximate upload rates for torrents depending on your internet plan. Click to open

To set your upload rates and torrent encryption, first open your torrent client. I’ll also be For the examples here I’ll be using qBittorrent and (sigh) µTorrent.

For qBittorrent press Alt+O or go to Tools -> options, then down to the “speed” button. Tick the box next to the first “upload” option, and then set your upload speed according to that chart. 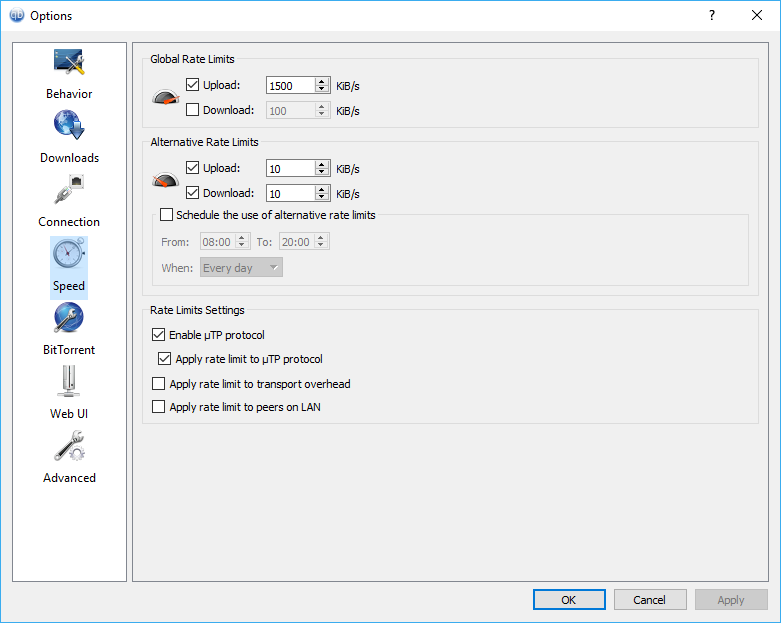 If you have no idea what your upload speed is, just set it to about 15. You might get less priority when downloading torrents, but if you’re entirely uncertain as to your internet plan that’s about as safe as you can get. With qBittorrent you can also click on the upload and download notifications at the very bottom of the client, and set your upload (or download if you like) from there. 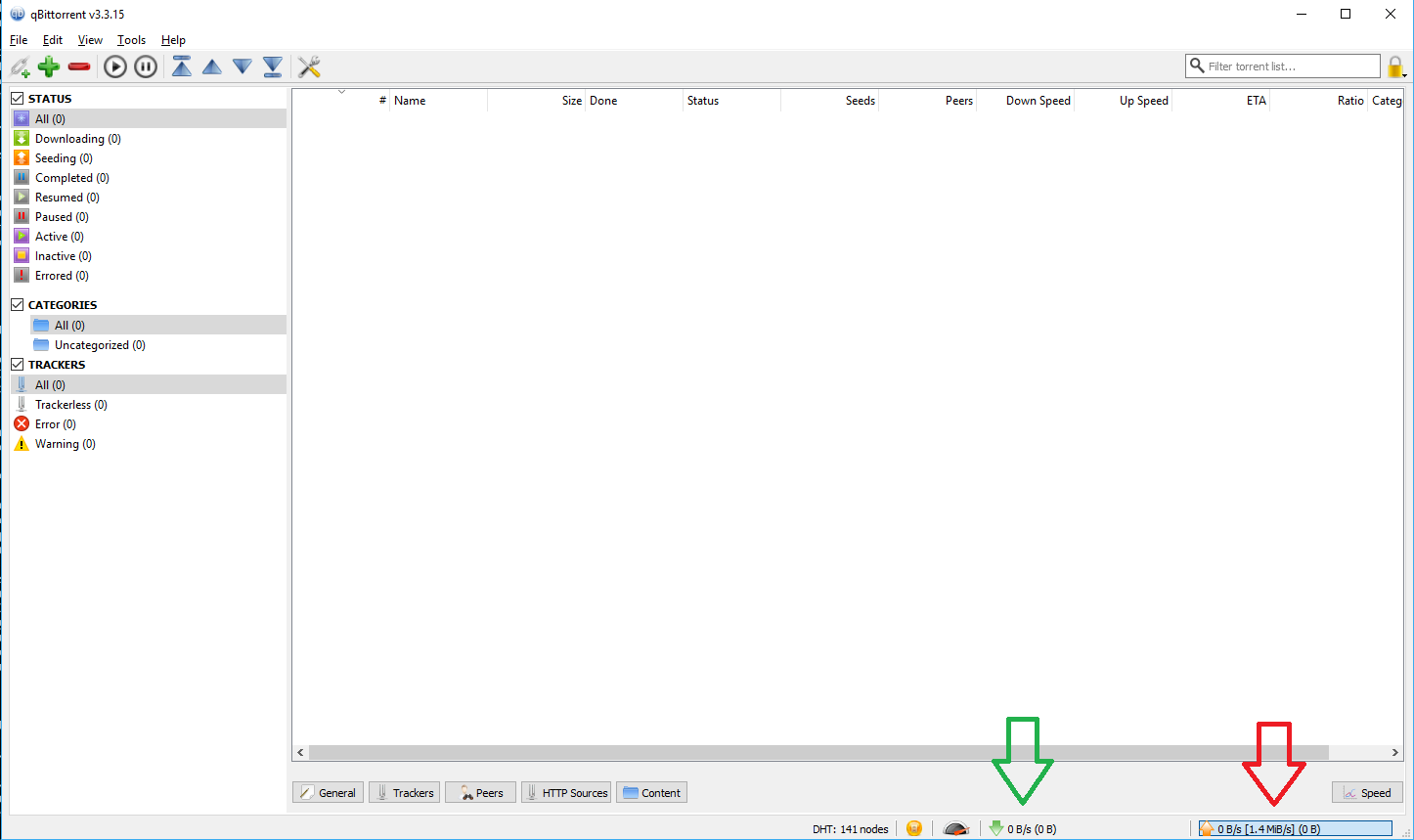 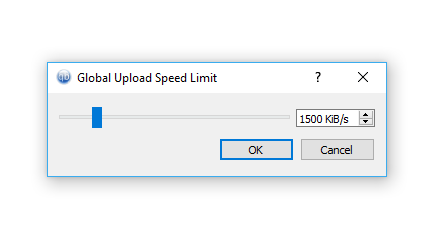 Clicking the speed limit brings up this box

You can also set a scheduler so your torrents download overnight, but I’m not gonna go into that now. 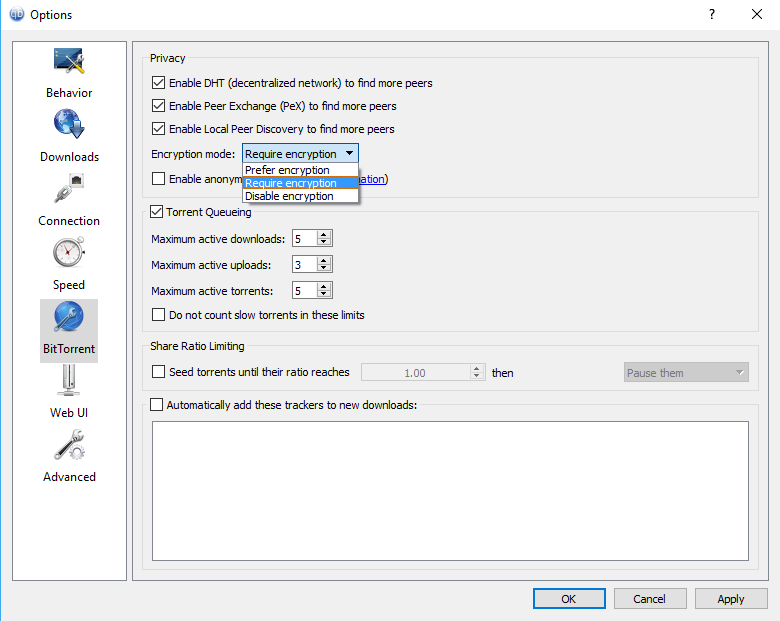 Do NOT enable anonymous mode, or you’ll pretty much never be able to download anything ever again.

Note: These options should work on MacOS exactly the same

For µTorrent you’ll need to press Ctrl+P or go to Options -> Preferences. Click the “bandwidth” button on the side and then set your upload speed. Just like qBittorrent, you can also set your download and upload speeds from the main interface window exactly the same way you do with qBittorrent. 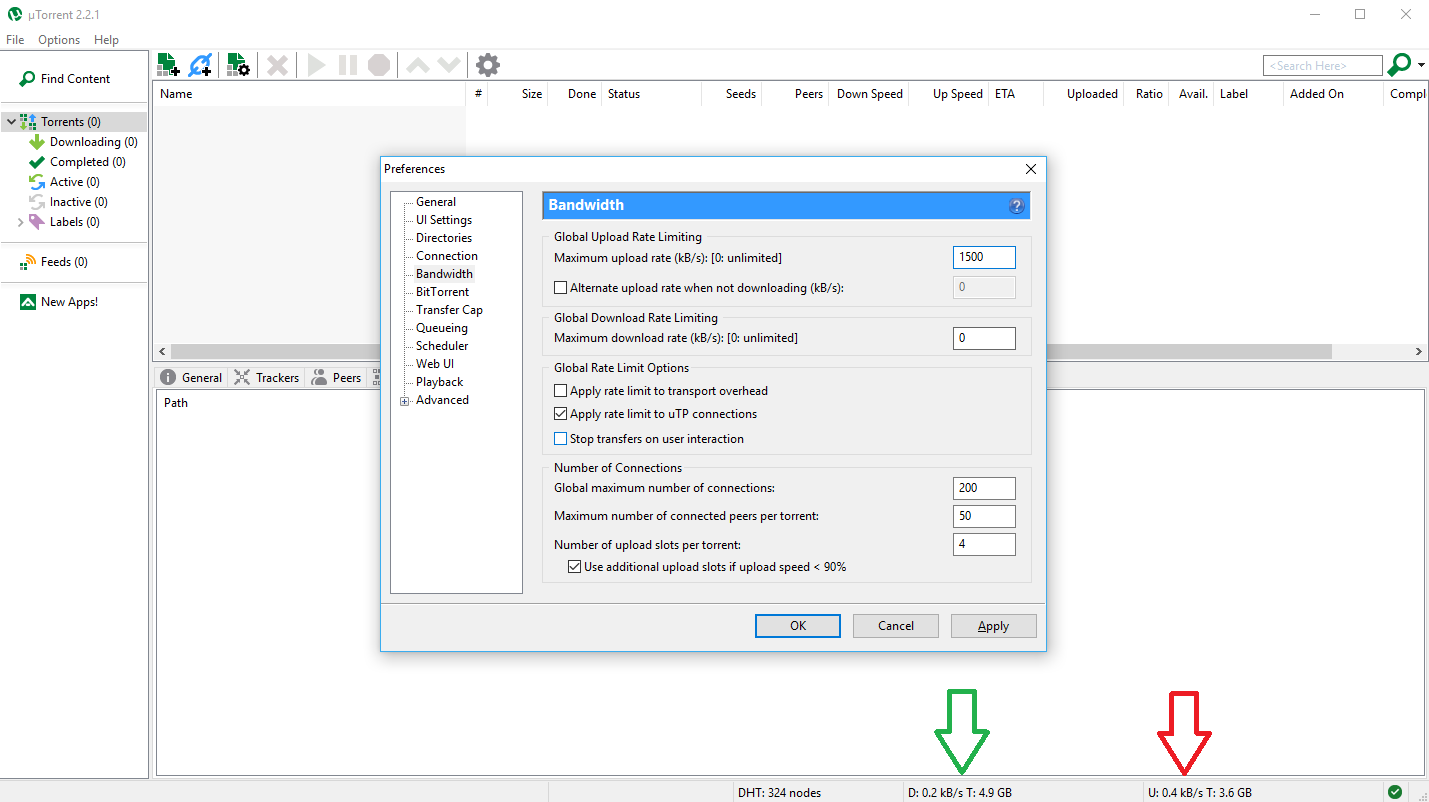 Green arrow down, red arrow up

Setting encryption is done pretty much the same way as qbt. Go to the “bandwidth” option on the sidebar and set torrent encryption to “forced” 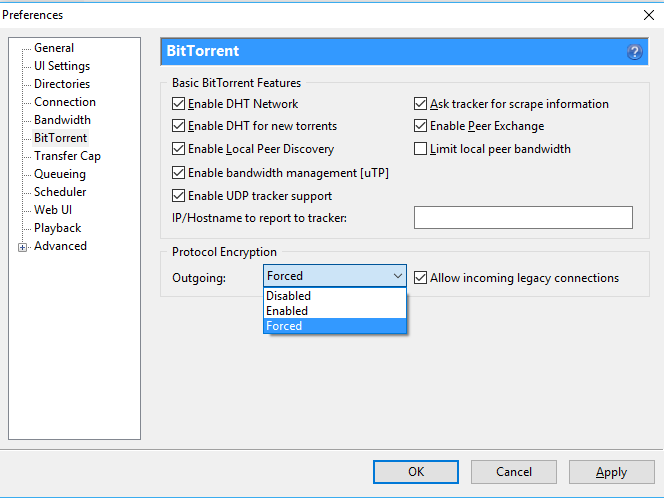 And finally, µTorrent has a very annoying habit of trying to make you update it to the latest version constantly. You DO NOT want to update it. Absolutely DO NOT let it update. When you first run the program, it’ll probably pop up a box asking if you want to update it, make sure you uncheck the “check for updates” box and select no. Next go into the options under “general” and uncheck all the boxes under Privacy. 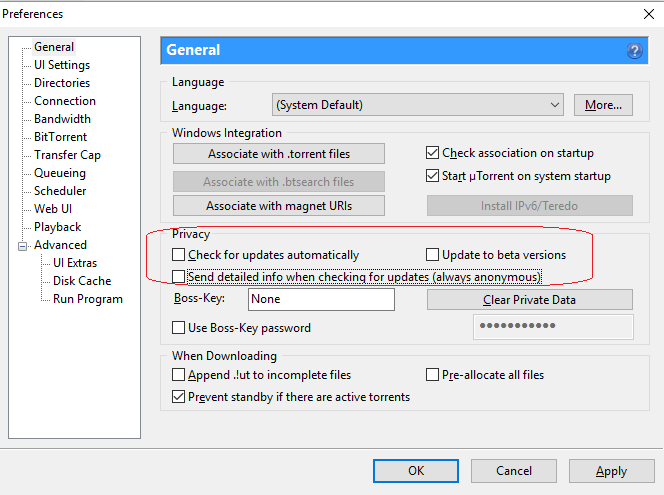 I still very strongly recommend not using µTorrent. Please. Please use something else.

But torrent sites are still blocked?

Ah so they are. The best method to fix this is to set the DNS in your router to either Google DNS or Open DNS. I use one of each. Both of them are reliable and don’t block torrent sites. Both of those links contain information on changing your DNS so you will see blocked sites again. You may need to reboot your router and computer after changing them to see any effect. I recommend changing the DNS in the router, not in your operating system, but if it proves too challenging, you may be able to follow the next instruction:

This is probably the easiest way to get around torrent blocks and the threat of paying out the arse because you don’t think it’s worth paying $27 to see a fucking movie in the cinema. Or $35 to buy a fucking blu-ray. The best company I’ve found is Private Internet Access. They have an app for each operating system including Android and iOS, and their speeds are good enough that you can torrent at full 100/40 NBN speed through them without slowdown at all. You can even set your account up in your router so you’re permanently connected to your VPN. They also have servers in about 50 different countries. VPNs are also useful for buying games online cheaper than on Australian stores, or watching blocked content on YouTube. At around $55 AU a year it’s also reasonably cheap, and unlike free or extremely cheap VPNs, they don’t sell your data to 3rd parties, log your actions or get overloaded and slow right down. PIA also offer full encryption, so good luck to anyone trying to prove you downloaded Dunkirk when all the computers in the world wouldn’t be able to decrypt a man-in-the-middle attack.

P.S. This isn’t a paid for article, I genuinely think Private Internet Access is a great VPN company. They’re not the only great company, but they are decently priced for how comprehensive they are.

This site uses Akismet to reduce spam. Learn how your comment data is processed.